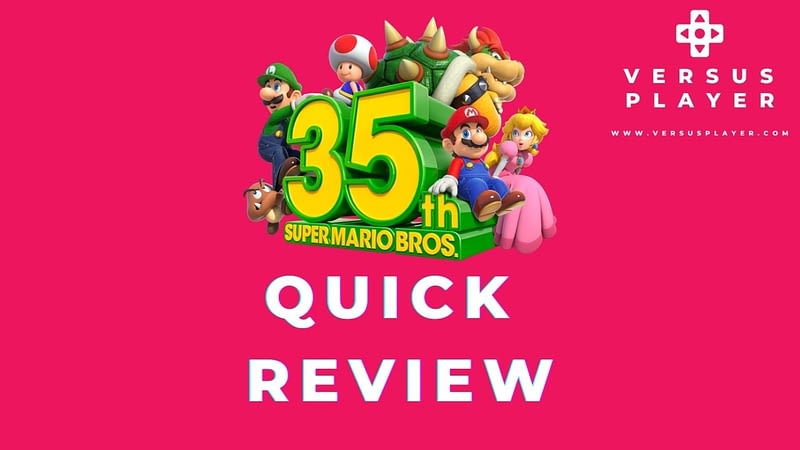 Short reviews from Joe for the average Joe gamer.

Super Mario Bros. 35 is the latest “free” game included as part of the Nintendo Online subscription. It pits you against 34 other players and the aim is to be the last Mario standing.

There is no question that one of the most iconic moments in video game history is the opening moment of Super Mario Bros. World 1-1. Mario starts off standing in front of a little hill, a bright blue sky covers most of the screen. You move Mario to the right, see a question mark block and a little mushroom creature (Goomba) waddling towards you. Just to the right are some brick tiles and another question mark block, this one containing a mushroom. This sequence has been etched into the memory of gamers of all ages.

In Super Mario Bros. 35, your play space is in the middle of the screen and looks exactly as you remember. Along the edges you can see your opponents’ progress on stages, who is attacking you and who is KO’ed. Along the bottom you can see which enemies are coming your way, and this is where the biggest difference lies from the original, and where the real fun is.

Stage layout is exactly what you remember, complete with all the secret 1-Up and power suit placements. That first Goomba is still there, waddling towards you, but in Super Mario Bros. 35, maybe its followed by another. Or a Koopa Troopa. Or a Spiny. The big difference is how the enemies come at you and where they do. Having Cheep Cheep’s (fish) flying across the screen while Bloopers (squid) float along, with flames from a far off Bowser coming your way on a stage that has never had any of these enemies on it before is what makes this game awesome.

The real bummer though is that you’ll be playing through a lot of the same stages over and over again within the same run. Random stage progression is cool, but not when you are doing the same stages repeatedly.

Starting your first run of Super Mario Bros. 35 can be a lesson on the dangers of complacency. It’s also Nintendo showing us that, like the brilliant Tetris 99, battle royale can work in the most unlikely places. There are specifics of how you attack and how you get attacked and there is an effective way to utilise coins and powerups, but really, this game isn’t about the nuanced details and metagame. This, like the original, is just a fun game to play.

Super Mario Bros. 35 is an absolute must play for any old school Mario fans. If you are not already a member, you can pick up a 7-day free trial of Nintendo Switch Online to give it a go. Otherwise I think a month subscription will probably be enough to whet the appetite of most gamers… just make sure you get in before it all comes to an end on March 31, 2021.

The idea of QVGR is to give gamers out there who don’t have time to read review epics and those of you who usually skip down to the review score on websites a quick article to read that gives a bit more info than scanning subheadings and deciding on a game just based on a score.

What do you think of the game? Pop in your thoughts in the comment box below. In the spirit of QVGR, try and keep your comments brief. The reason people are here is that they have busy lives!

If you like this, you might also like our VERSUS PLAYER podcast. Like these articles, we usually try to keep our weekly episodes short and we chat about what games we are playing, gaming news, movies, pop culture, life and everything in-between. Give us a listen here or on a whole bunch of podcast services, including iTunes.

Subscribing to our podcast via your favourite service really makes a difference to Versus Player.  If you could take a moment to give us a review it would mean the world to us!